College of Liberal ArtsFeaturedAuthor of the Month: Alexandra Jaffe

Author of the Month: Alexandra Jaffe

Sociolinguistics from the Periphery: Small Languages in New Circumstances 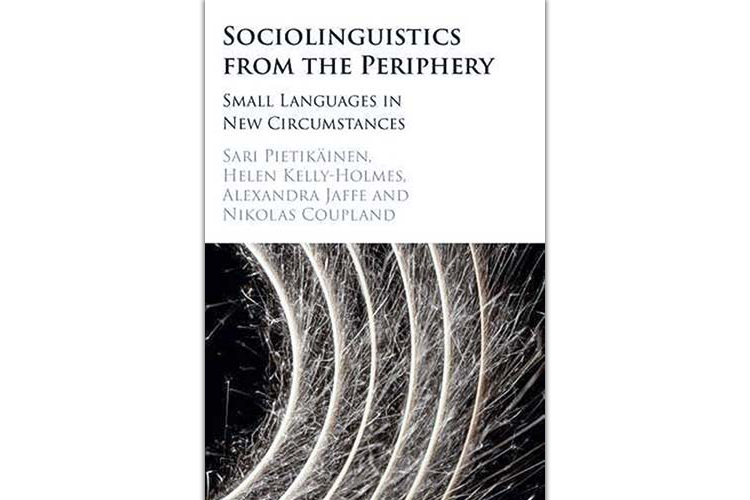 In June 2016, Alexandra Jaffe, a member of the university since 2001 and current chair of Linguistics, saw the publication of her latest book, Sociolinguistics from the Periphery: Small Languages in New Circumstances, with Cambridge University Press, co-authored with an international team of scholars—Sari Pietkainen (Finland), Helen Kelly-Holmes (Ireland) and Nikolas Coupland (Wales). The book is the culmination of a four-year collaborative project funded by the Finnish Academy in which Jaffe and her colleagues explored how the “new circumstances” of globalization inflect the meanings of speaking “small”—that is, indigenous (Sami) and minority languages (Corsican, Welsh and Irish) on the “peripheries” of Western Europe. Jaffe said that the book is innovative in both its structure and content. First, she and her co-authors collaborated on every single chapter, so that they all reflect their combined perspectives. Rather than taking a geographical focus, each chapter draws on data from all four sites to explore themes on the leading edge of contemporary sociolinguistics: Reflexivity, Authenticity, Commodification and Transgression. The analyses also upset a number of taken-for-granted oppositions: between center and periphery, old and new, and standard and non-standard. Such research is urgent in multilingual small-language contexts, where different conceptualizations of languages, boundaries and speakers affect individuals’ social, cultural and economic capital. “Globalization can change what it means to be a speaker of a minority language,” Jaffe commented, “because the meaning and value of these languages is repositioned so they are not just seen in light of their relationships with dominant, national languages like French, Finnish or English.” Jaffe explained that one of the book’s core focuses was on cultural tourism, since tourism is both an example of global flows of people and “offers a way of looking at how culture and language are reproduced and represented for others.” In her own research on Corsica, for example, she documented innovative semiotic representations of Corsican culture using new media, and incorporating Mediterranean and global themes (like Japanese Zen gardens). She and her collaborators also explored online and public comedic performances as well as the world of commerce, where “we tracked and analyzed the effects of globalization on artifacts ranging from T-shirts to coffee mugs.” Jaffe encourages both the campus and the community to give Periphery a look. “This book represents four avenues of research into four specific places,” she said. “But the social and communicative processes we describe apply across the world to similar contexts where people who are members of minority and indigenous languages and cultures engage in (re) positioning themselves in the world through acts of linguistic and cultural exchange.” In short, the themes of this book pull together both the linguistic and cultural dimensions of experience. Jaffe’s 1999 book on Corsica, Ideologies in Action: Language Politics on Corsica, was recognized with the first Edward Sapir Book Prize by the Society of Linguistic Anthropology under the American Anthropological Association. She received her B.A. in English and French literature from the University of Delaware and her M.A. and Ph.D. from Indiana University, the latter in 1990.

Originally published in Inside CSULB: http://web.csulb.edu/misc/inside/2017/06/05/author-of-the-month-alexandra-jaffe/