Not Alone at The Beach 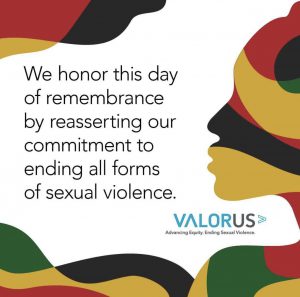 SACRAMENTO, CA — This year, ValorUS’ (VALOR, formerly the California Coalition Against Sexual Assault) board of directors, voted unanimously to add Juneteenth as an official holiday. Following this organizational policy change, the United States Congress took a historic vote declaring Juneteenth National Independence Day as a federally recognized national holiday, and is believed to be the first time the United States will commemorate and celebrate the official end of institutional slavery in the US. This official recognition provides much needed leadership as the entire nation pursues efforts to address the enduring harms of chattel slavery and systemic racism.  As we officially commemorate the end of US slavery, VALOR also recognizes the day as one

of liberation from one of the key weapons of domination during slavery: the routinization of sexual terror.

In 2018, the New Jersey Coalition Against Sexual Assault made connections between slavery’s practice of sexual violence and ways in which “the legacy continues to haunt American life:” in addition to sweeping health, economic, and juridical disparities lingering from slavery, Black women, children, and men continue to be viewed as sexually anomalies, which seeds the conditions for sexual violence, accusations of and increased prosecution for sexual violence, and maltreatment in response to sexual violence.  In Caroline Randall Williams’ 2020, New York Times OpED, “You Want a Confederate Monument? My Body Is a Confederate Monument,” she writes “I am a black, Southern woman, and of my immediate white male ancestors, all of them were rapists. My very existence is a relic of slavery and Jim Crow.”  Like so many descendants of US slavery, Williams positions herself as evidence of slavery’s sexual violence. Today, many Blacks and other persons of color struggle with colorism, passing, and living in between races belonging neither here nor there.  We understand the desire to leave painful aspects of the past in the past; however, as Williams points out, we are reminded of those historical harms on a daily basis. The denial of those historical injuries seeks to erase the original injury which on some level, functions to erase our very being.

Sustained rape, sexual abuse, and sexual mayhem, or ‘sexual terror,’ has been used globally and throughout history as a means of ethnic cleansing, the building new nations, and in the case of US slavery, racial domination and plantation economies. In the US context, White men’s perpetration of sexual violence over the course of several hundred years against Black and Native women is widely known. But a fuller picture of the institution of slavery understands how the grooming and abuse of Black children, forced interracial sex, the maiming of genitalia, and gynecological experimentation, served to dominate Black people. Juneteenth celebrates liberation from sexual terror, a system of sexually violent practices and complicity which lingers to this day.

As part of a global movement to advance equity and eradicate oppression, we consider it our solemn duty to commemorate Juneteenth as the end of a brutal system of legalized sexual terror against Black women, men, and children.  We honor this day of remembrance by reasserting our commitment to ending all forms of sexual violence, including modern-day slavery and human trafficking. Here at home, we must repair the injustices of our past, so we can finally build a future that truly asserts the dignity of all people.  In addition to Congress’ historic vote, VALOR commends the various actions underway such as the city of Evanston Illinois, 1st city in the US to offer Black residents reparations, and the State of California for the first-ever creation of a task force to study reparations to Black Americans and provide recommendations for State policies to address the lingering impacts of slavery.

VALOR calls for all social justice movements to do what they can and take action by:

As our country looks to acknowledge the past, and present harm and identify strategies for repair, we recognize that the remnants of rape within the institution of slavery remain hundreds of years later.

What are boundaries? They are basic guidelines th

Read that again. You and your feelings are valid.

It may be difficult to console someone who has end

Join us in our next workshop, “Sex Trafficking 1

Thank you to the other CSU Campuses for their cont

Swipe to learn more about what the white shirt in

Swipe to learn more about what the white shirt in

There are no upcoming events at this time.