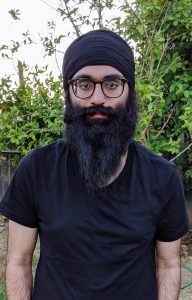 As a world historian, Dr. Rajbir Singh Judge’s research into the relationship between state authority, empire, emotion, and identity in the Sikh diasporic community is both steeped in theory and original in approach. Dr. Judge examines how Sikhs in the late 19th century strived to reinstitute a Sikh empire (Khalsa Raj) to challenge British colonialism.

This fall, Dr. Judge will bring that original approach to CSULB when he joins the College of Liberal Arts as an assistant professor of history. A graduate of CSU Chico, he is excited to teach in the university system that he says was a big part of his success.

“I grew up in a Sikh migrant farmworker family in low-income housing, in which a four-year college, let alone graduate school, seemed outside the horizons of my possibilities,” he says. “The CSU system’s welcome atmosphere and mission to serve first-generation students and minorities gave me the opportunity to begin and advance my own studies. I always knew I wanted to return, and I’m thrilled to have the opportunity to teach at CSULB.”

Dr. Judge will be teaching History & Theory and Contemporary World History classes in the fall. He specializes in the cultural and intellectual history of South Asia with a particular emphasis on Punjab. Judge holds a bachelor’s degree in history, religious studies, and philosophy from CSU Chico, and a master’s degree and doctorate in history from UC Davis.

As an educator, Dr. Judge says that witnessing his parents and how people interacted with them has had a major influence on his academic pursuits in history, philosophy and religion.

“As a child, one is told they must wait, endure, delay all the while bristling with hope for a time to come, a better horizon, in order to break an entrapping cycle of poverty,” he explains. “Retroactively, my parents’ own struggles could take meaning as sacrificial love if I worked hard in my studies. Their labor in the fields and cannery could become redemptive traced, through linear time, to my own success, the success of the son.

“These are dangerous assumptions since harm, then, actually becomes a good when stretched through time, as Elizabeth Povinelli has it. Present-day suffering, read from the redeemed end of individual responsibility, then becomes, incredibly, justified. These are historical, philosophical, and theological questions that troubled, and continue to trouble, me as a teacher and a learner.”

A first-generation college student who worked full time while pursuing his undergraduate degree, Dr. Judge understands the pressures that a large portion of the CSULB student body faces and is committed to mentoring non-traditional students. Dr. David Shafer, chair of the history department at CSULB, is confident that Judge’s scholarship and expertise will have a large impact on the department and will provide a great example of what a CSU degree can lead to.

“For the history department, Dr. Judge adds three main things,” Dr. Shafer says. “He adds an expertise in world history and in South Asia, in particular; a strong grounding in intellectual history and theory, and a focus on religion and history.”

Dr. Judge’s passion for history extends well beyond the classroom. He is currently working on a book project called “Prophetic Maharaja: Sovereignty and the Sikh Tradition in Colonial Punjab,” which examines the ways in which Sikhism at the end of the 19th century remained a generative site through which Sikhs and their diverse milieu in the Punjab contested British rule.

Before joining the CLA faculty, Dr. Judge was a postdoctoral research fellow for two years at the Institute for Religion, Culture, and Public Life with affiliations in the department of religion and South Asia Institute at Columbia University in New York City. His most recent publications include “Dusky Countenances: Ambivalent Bodies and Desires in the Theosophical Society” in the Journal of the History of Sexuality; “There is No Colonial Relationship: Antagonism, Sikhism, and South Asian Studies” in History & Theory; and “Mind the Gap: Islam, Secularism, and the Law” in qui parle: Critical Humanities and Social Sciences. He has articles forthcoming in Milestones: Commentary on the Islamic World, Cultural Critique, and positions: asia critique.