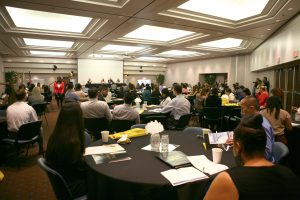 The Career Development Center held its first College of Liberal Arts Internship Conference on Friday March 13, 2015 at The Pointe at The Pyramid. The event provided students of all majors with the opportunity to hear from a variety of guest-speakers on the importance of internships for their future career success. The goal of the conference was to meet the needs of all majors from all class levels in an entertaining, inspiring and educational way. The event’s learning outcome was designed to help students explore, prepare and connect with employers attending the conference. The main focus was on what today’s employers are looking for in college hires when it comes to internships or full-time positions.

The conference was held from 8:30am-3:30pm and kicked off with Long Beach City Mayor, Dr. Robert Garcia, who’s a CSULB alum and former ASI President. Mayor Garcia made a virtual guest appearance and had this to say in regards to his belief in the importance of internship programs for undergrads: “I recognize the tremendous value of a Liberal Arts Degree and the amazing benefits that internships give students. As mayor, one of my top goals is to increase the number of internships offered within our city. Internships allow students to put their knowledge to work in the real world in their chosen field and build their networking relationships.”

Mayor Garcia’s speech was followed by Keynote speaker Karl Kemp, a Democratic Lobbyist and owner of the Kemp Group, who gave honest advice to students about the importance of being real and his secret to winning at the networking game. Kemp’s speech focused on why it’s vital that student’s attain their degrees above all else, and that most employers don’t care if you graduate with a 4.0 GPA. Kemp maintains that what employers really care about is whether you can read, write, and speak, and if you have critical thinking skills. Kemp said this about his career success despite not being a fan of networking, “How I am supposed to tell people to go out and network when I don’t like networking myself?” His advice to students is his full-proof approach to being a networking pro—JUST. STOP. NETWORKING. He learned the secret to this simple approach while running for office when he had to knock on thousands of potential voter’s doors. As someone in such a public position, he had to find his own way to make networking work for him.

Kemp’s 3 keys to winning at the game of networking include: Rule One, don’t network, meaning that it’s best to take a natural approach in meeting people who may be able to help students’ further their career aspirations; Rule Two, Kemp advises students that when it comes to personal branding looks matter when students are presenting themselves to potential employers; and Rule Three, that the strength of one’s handshake is also important as a way to signify your strength and sincerity. Kemp states that the best way for students to conquer their networking fears is through being brave and knowing that you’re not alone.

The student panel gave insight on several guest students’ internship journeys and what they did to score positions in highly competitive companies. CSULB Alumni Association member, Diana Pinedo, said, “I prepared for my first internship bycreating my portfolio and making sure to include any writing samples I had, published and non-published. I also made sure that my resume was updated with relevant job experience that would be applicable to positions I was applying for. Then I really upped my game by getting involved on campus through PRSSA, and then everything started to build up for me from there. Now, I’m on my third internship going on my fourth this summer and it all started with just taking the initiative.” Pinedo also suggests that students should even think about having their own personal elevator pitch that introduces them and what they’re all about in less then one minute.

The employer panel discussed how students can make powerful first and lasting impressions on potential employers. Kandice Taylor-Sherwood, the Executive Director of Civil Service in the City of Long Beach said, “The students that showed up this morning are among the top choices for internship candidates in my book just by being here.” Taylor-Sherwood went on to share a story about one of her past students that made a lasting impression on her. “I was teaching this young individual who always sat quietly at the back of class but took the initiative to meet with me during my office hours. I could tell that he was honestly trying to build a mentor-type relationship with me because he made it a point to ask regularly for my advice and insight. At the end of the semester he came to me to see if I had any work available for him even on an unpaid basis, and he sold me on the skills he could bring to my organization. So what am I looking for? I’m looking for someone who’s interested in pushing their personal boundaries and not just always feeling comfortable and resting on their laurels. I’m looking for someone who’s proactive and finds needs that I might have who can contribute where I didn’t know I needed help. Above all? I look for someone that has genuine passion.”

The event also included activities for students like an internship fair, mock interviews, resume critiques, and a LinkedIn photo booth. The internship fair featured a variety of organizations from Enterprise and AARP, to the Child Abuse Prevention Center and the CIA. Students were able to test out their interviewing skills and receive one-on-one feedback about their performance and what they could do to improve. Resume critiques also offered students a chance to hear the truth about their resumes and even a chance to re-do them with professionals on the spot. Antoine Cook of AARP, which was offering qualified students communications internships for February 2015-December 2015 said, “We look for students who are willing to just jump in and learn and who aren’t afraid to take initiative.”

Mayor Garcia’s closing statement holds much promise for CSULB students looking to graduate to a successful future. “A Liberal Arts Degree from Cal State Long Beach will prepare students for success almost any field, and gives them the foundationalknowledge and skills to succeed in almost every career path.”