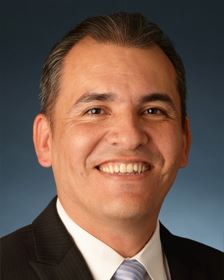 He is on a roll!  Last year, our University was awarded once again a $2.7 million dollar HSI (Hispanic Serving Institutions) grant of which profe Jose was the Co-Principal Investigator in developing curriculum pathways to prepare culturally competent student and teacher programs.

During the same relative period, he was elected as City Councilman of Anaheim, one of the largest cities in Orange County, with over 360 thousand residents and approximately 27 million visitors a year.  The challenges are big.

In November of 2017 he received the New American Hero award for a project that encourages and promotes the preparation of elected officials with immigrant backgrounds.  https://www.newamericanleaders.org/what-we-do/new-american-hero-awards/

And now, as recently as last month, he has been elected by his City Council peers to serve as Mayor pro-tem. Yay!

Two weeks from now, he’ll be in Philadelphia as an invited speaker for the Association of American Colleges and Universities on general education and assessment. https://www.aacu.org/search/node/jose%20moreno

These are just some of the recent highlights.  We need to support him in all the exemplary goals he aims to achieve.

We are all so proud of you, José!!!  Adelante con la Lucha!