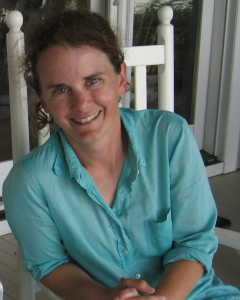 Professor Luhr’s research interests include cultural and religious history, politics, modern United States history, and history pedagogy. Her first book, Witnessing Suburbia (University of California Press, 2009), explored the intersection of conservatism, religion, and suburbanization by demonstrating the ways in which conservative religious beliefs helped reshape the political and cultural landscape of the late twentieth century. Her current project, Pilgrims’ Progress: Globalization and the American Religious Imagination, examines how religious beliefs get re-invoked, re-shaped, and re-imagined within new economic and cultural contexts. The first published chapter from the project examines lifestyle spirituality—including surfing and yoga—in the city of Encinitas, California in order to understand how a cosmopolitan religious imaginary took root in American culture during the recent past. Other chapters in the project include topics such as the missionary work of Paramahansa Yogananda and the progressive political and spiritual beliefs of the owners of Dr. Bronner’s, a San Diego-based soap company.

Professor Luhr also serves as the advisor and acting coordinator for the Social Science Credential Program. In addition to teaching the capstone course for credential student in the subject matter program, she teaches courses in United States religious and cultural history, the junior-level seminar History and Theory (History 302), and the introductory seminar for incoming graduate students.

“Seekers, Surfers, and Yogis: The Progressive Religous Imagination and the Cultural Politics of Place in Encinitas, Californa,” American Quarterly (December 2015), 1169-93.

“Cold War Teenitiative: American Evangelical Youth and the Developing World in the Early Cold War,” Journal of the History of Childhood and Youth (Spring 2015), 295-317.

“A Revolutionary Mission: Young Evangelicals and the Language of the Sixties,” in In and of the Times: New Perspectives on American Evangelicalism and the 1960s, edited by Axel Schaefer (University of Wisconsin Press, 2013)