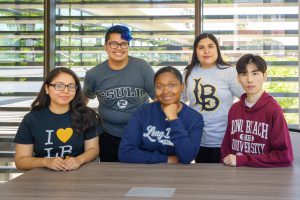 It is the goal of the University that courses at CSULB foster respect for racial and ethnic diversity in the US. Thus, the sample of courses featured below introduce students to the life experiences of people with whom they are less familiar. This promotes the understanding of diversity and encourages tolerance and acceptance of others in our increasingly multicultural society. While CSULB recognizes the importance of other forms of diversity—gender, religion, sexual orientation, physical ability status, nationality, etc.—these featured courses focus specifically on the experiences and concerns of four historically underrepresented racial/ethnic groups within the US: Native Americans, African Americans, Latinx people, and Asian Americans. These courses therefore provide a critical examination and understanding of the nature and social implications of race and racialized ethnicity as both social constructions and lived realities, especially as it relates to the four historically underrepresented racial/ethnic groups in the US named above.

A full list of Fall 2021 Human Diversity courses can be found at: http://web.csulb.edu/depts/enrollment/registration/class_schedule/Fall_2021/By_GE_Requirement/HUM-DIVERS.html