As a young woman traveling the world, Dr. Clorinda Donato had this idea, a dream really, where someone from Japan could ask a Mexican in Spanish about immigrating to the United States.

“The world was popping for me and I wanted to be one of its multilingual ambassadors,” said Donato, the George L. Graziadio chair for Italian Studies. She wanted to be that person who could converse with her family in Italian, talk to a Frenchman in French about the Italian painter Modigliani, who lived in France, and sign with a deaf friend. 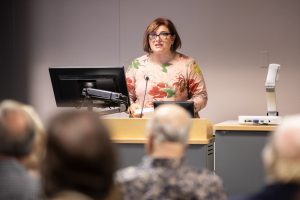 “The courses at the university made some of that possible, but it also made me curious,” she said.

That curiosity led Donato to hold fast to her dream of interconnecting cultures and languages and eventually establish the Clorinda Donato Center for Global Romance Languages and Translation Studies, made possible by a $1.1 donation from Mario Giannini, a longtime supporter of Italian Studies. The Center officially opened last week in the College of Liberal Arts.

“We always talked about the importance of language, but the vision is Clorinda’s and that’s what made it interesting to me,” Giannini said.

“But here was a chance to get an interdisciplinary, something done where language becomes important. I feel we live in an age where no one cares about culture and language and humanities and they matter, they matter a lot.”

Donato said the Center will enable students to acquire new skills necessary in today’s ever-expanding global world. She has said that the importance of languages and cultures in peoples’ lives is “vastly underrated and underappreciated.”

This is the first center in the United States to promote intercomprehension and multilingual approaches to language teaching, strategies that boast a growing presence throughout Canada, Europe and Latin America. 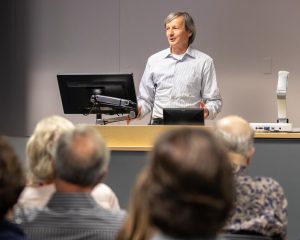 “Understanding cultural, economic, political and social intricacies of the world from local to global multinational is a requirement for the future,” President Jane Close Conoley said. “We will not continue to be world leaders and world citizens without that. So, training in communication, cultural studies, media, languages and combining that with other disciplines in the college and across the university, will create opportunities and make our students highly sought after by many, many industries, businesses, universities throughout society.”

The overarching goals of the Center are to establish collaborative, integrative and interdisciplinary educational and research programs in the teaching of Global Romance Languages and Translation Studies. Donato has said she hopes the Center will become a “powerful tool” that will attract top scholars to its research projects.