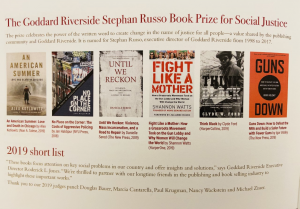 For a digital press packet including author and book jacket photos, associated logos, and a photo of the judges’ panel, go to goddard.org/packet2019 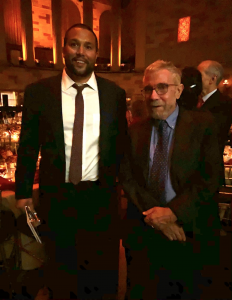 No Place on the Corner: The Costs of Aggressive Policing by Jan Haldipur (NYU Press, 2018) and An American Summer: Love and Death in Chicago by Alex Kotlowitz (Nan A. Talese, 2019) were announced as winners at Goddard Riverside’s Annual Gala. The award, now in its third year, celebrates the power of the written word to create change in the name of justice for all.

This is the first time the prize has been shared by two titles. “We did this because we think these books are very complementary,” explained Douglas Bauer, chair of the judges’ panel and executive director of The Clark Foundation. “Between them they tell the very unfortunate story of the impact of gun violence on urban communities.”

Through in-depth interviews, An American Summer chronicles the lasting impacts of shootings in Chicago — on survivors, family members, children, schools, friends, neighbors, and even the shooters themselves. No Place on the Corner uses the lens of a three-year ethnographic study to explore how aggressive policing tactics, such as stop-and-frisk, traumatized a South Bronx community and made public spaces off-limits to local residents.

Along with Bauer, the distinguished slate of judges includes Paul Krugman, New York Times columnist and Nobel Prize winner; Marcia Cantarella, university administrator and author of I CAN Finish College: The Overcome Any Obstacle and Get Your Degree Guide; Nancy Wackstein, former executive director of United Neighborhood Houses of New York; and Michael Zisser, former CEO of University Settlement and The Door. The book prize is named after Stephan Russo, who served as executive director of Goddard Riverside from 1998 to 2017.