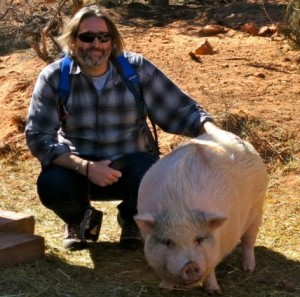 Brett Mizelle is Professor of History and Director of the American Studies Program at California State University Long Beach. His publications include articles, book chapters, and reviews in the fields of nineteenth-century American history and the history of human-animal relationships. His most recent articles tell the story of James Capen ‘Grizzly’ Adams and his role in the construction of knowledge about (and the destruction of) grizzly bears and trace the contestation over the training and exhibition of horses and big cats in the history of the American circus. His book Pig (Reaktion Books, 2011) charts how humans have shaped the pig and how the pig has shaped us, focusing on the unresolved contradictions between the fiction and the reality of our relationships with pigs. He has a sabbatical leave and fellowships from the American Antiquarian Society in Worcester, Massachusetts and the Library Company of Philadelphia in Spring 2014 to begin work on a book-length project tentatively entitled Killing Animals in American History. Dr. Mizelle is also a co-founder and current editor of the H-Animal Discussion Network (http://www.h-net.org/~animal/) and the recipient of the Humane Society of the United States’ “Animals and Society Course Award” for his class “Animals in American Culture.” He can be reached at brett.mizelle@csulb.edu.