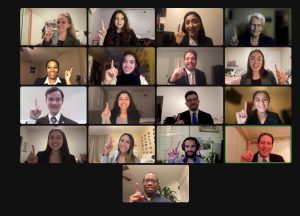 This is CSULB’s second national championship in oral advocacy.  Only one other school has more—and just one more!  CSULB is one of just two public universities to win a national title for oral advocacy in AMCA’s 22-year history and it is the only public university to qualify for more than one national final (three) and more than two national semi-finals (four).

The competition, which was held on Zoom, featured 100 teams from schools such as the University of Chicago, Yale University, University of Pennsylvania, and UC Berkeley.

Chaudhary and Romero, the only team in AMCA history to win three regional tournaments, won five of five competitions in 2021-22 and went undefeated on the season.  In addition to winning the national title for oral advocacy they finished 4th in the nation in respondent written advocacy.  They graduate as the winningest team in CSULB history.   Chaudhary and Romero defeated three teams from the University of Chicago, including one in the finals, one from traditional AMCA powerhouse Patrick Henry College, and their own teammates Kelton Munch and Georgina Tierney (quarter-finalists).  CSULB’s Aleece Hanson and Celeste Sanchez also qualified for the quarter-finals.  This gave CSULB three of the nation’s top 8 teams!

Beyond this, CSULB won three regionals for the season and earned six bids to nationals.  CSULB’s Jessica Zatarain was named a top ten orator finishing 8th in the nation.

Please join us in congratulating Lewis Ringel, and his whole team!