My current research interests lie at the intersection of legal theory, judicial decision making, and Christian legal activism.  Most recently, I published an article in the Journal of Law & Religion, entitled “Tool or Lens? Worldview Theory and Christian Conservative Legal Activism,” tracing the intellectual history of the concept of “worldview,” critiquing the way this concept is employed by Christian conservative legal organizations and activists as a “tool” to achieve legal and social victories, and defending an alternative understanding of worldview as a socially constructed “lens.”   I also have a recent article in the Tulsa Law Review, entitled “Faith, Reason, and Liberal Legal Neutrality,” critiquing the supposed value neutrality of liberal political and theory and defending a personalist understanding of religiously motivated legal claims in the secular legal arena.

I am also working on a book tentatively titled, “The Law of the Lord: Mapping the Legal Worldview of Christian Conservatives.”  As the title suggests, I am trying to describe and analyze the way Christian theological and social views translate into legal views on issues such as same-sex marriage, religious conscience exemptions, and abortion.  This book will build on several papers I have presented at scholarly conferences over the past few years. 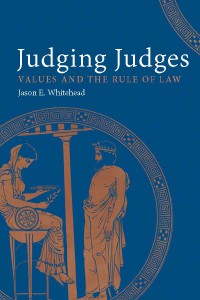 “The Law of the Lord” builds on the foundation I laid in my first book “Judging Judges: Values and the Rule of Law,” which described and analyzed the professional, social, and personal values that motivate judges when they interpret law. “Judging Judges” was the culmination of several years of research, including some papers presented at various academic conferences.  In fact, my interest in these issues goes all the way back to my days in graduate school, where I studied political theory, public law, and American politics, with a special emphasis on post-positivist legal theory and New Institutionalist studies of judicial decision making.

My earliest research — some of it published when I was a law student and an attorney — was greatly influenced by radical left0wing theories.  I was especially interested in applying Frankfurt School critical theory to the law, and I was convinced that getting back to the roots of critical theory in this way could revive and enliven the Critical Legal Studies movement. “Toward a Critical Theory of the Rule of Law: William E. Scheuerman’s ‘Between the Norm and the Exception,’” Oklahoma City University Law Review 26 (summer 2001): 663-91. “From Criticism to Critique: Preserving the Radical Potential of Critical Legal Studies Through a Reexamination of Frankfurt School Critical Theory,” Florida State University Law Review 26 (Spring 1999): 701-42. “The Labor Exemption From Antitrust as an Ideological Antinomy,” Willamette Law Review 32 (Fall 1996): 881-919.